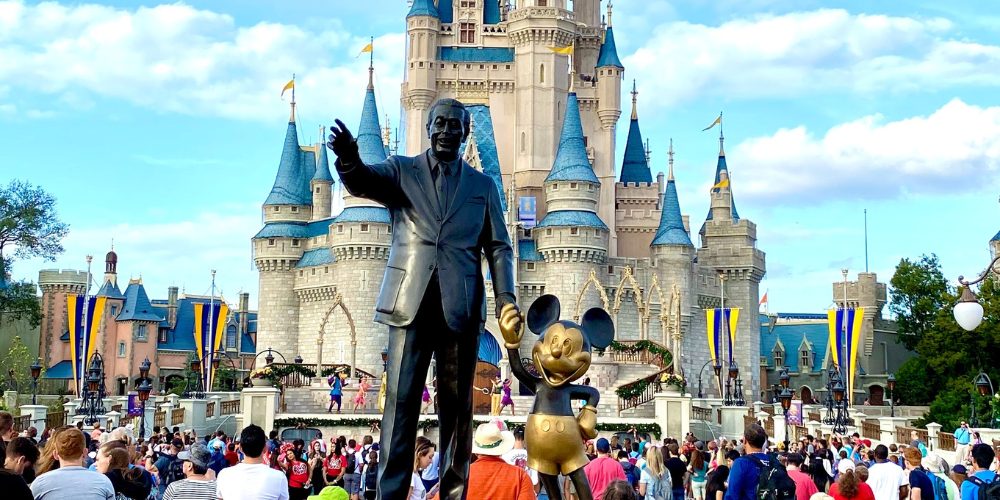 In this article you will learn: Learn about the 5 lessons learned on their journey of reaching out to non-believers and growing as disciples, without a building or paid staff, in the culture of Walt Disney World. Written by Steven Barr, founder of Cast Member Church.

Could you imagine a church family of more than 1,600 people actively growing as disciples, spread across six continents, in multiple cultural settings and languages, without a building or a single paid staff?

Could you envision a church that turns away church shoppers and hoppers and focuses specifically on those who have never touched a Bible?

But that’s what happened.

Cast Member Church at Walt Disney World began 11 years ago with my wife, our two young children, and myself. Today, Cast Member Church Global has expressions in Orlando, Anaheim, Paris, Tokyo, Hong Kong, Shanghai, and a plethora of gatherings online throughout Europe, Asia, and Oceania.

I’m not bragging. Our journey is littered with more failures and lessons learned than I could ever count. We are just now beginning to get it right. But the truth is, Jesus deserves all the credit. He has patiently guided us away from my vision for a church in the Disney Cast Member culture to God’s vision for a church that God desires.

When we arrived in Orlando, Florida, I had a vision for a church that would serve the 74,000 employees—called “Cast Members”—who worked on the 47 square mile property of The Walt Disney World Resort. I wanted to reach those who didn’t know Jesus at all. I believed that we could have a church with all the “sparkle and wow” of Disney and be very attractive to them.

This belief dissolved two weeks after we arrived.

Having been in a church bubble for over 25 years, I was suddenly immersed in the world of the most influential entertainment enterprise on the planet: The Walt Disney Company. I was in the world of show business. I learned that many churches before us had tried to break into Disney, but most had given up and set up camp elsewhere.

Call it God’s divine inspiration or something else, but we knew that if we were going to have any Kingdom Influence in Disney, we would have to be different from any other church that had tried in the past. This revelation was the genesis of an adventure that led to failing forward—over and over—to where we are today.

In this article, I would like to share with you five lessons (of several dozen) we have learned on our journey. Some run contrary to what is considered common practice in the Church today. You might not agree with every one of them. However, I can assure you these lessons are based on our experience with hundreds and hundreds of young people around the world, with no Biblical point of reference.

These five lessons have traction.

Before Cast Member Church began, I trained as a church planter. I went through the boot camp (why do they call it that???) and received training, which included gathering a team, raising lots of funds, learning strategies and techniques, etc.

Once we “launched” Cast Member Church, I discovered that generally accepted church planting strategies appeal mostly to church shoppers and hoppers. So, we threw out all of our “boot camp” training and started over.

We decided to immerse ourselves in the Disney Cast Member culture, build credibility through relationships, be vulnerable (inviting others to be vulnerable with us), and plant Jesus along the way. And it worked.

Not only did it work, but it felt natural and unforced.

People who were not followers of Jesus wanted to be with us all the time. They knew we valued them, were sincere with them, and we had something they wanted: HOPE.

Today, 95% of Cast Member Church consists of those who didn’t know Jesus before they met us.

Today, 95% of Cast Member Church consists of those who didn’t know Jesus before they met us.

Planting new churches isn’t the primary path to Kingdom expansion. I’m not saying that it’s wrong. But the answer to Kingdom expansion is equipping and empowering those who are already Christians to become planters of Jesus. When we plant Jesus faithfully, eventually, Jesus will birth churches.

Imagine for a moment, every person in your church actively planting Jesus at work, school, the gym, soccer field, or anywhere else life happens. What are the possibilities?

Experience tells me that you will not have an issue with how to grow your church.

Something to think about: Most new church plants fail every year. Those that survive usually appeal to those who are already Christians. What must you do to see that change?

I love strategy (what pastor doesn’t?). Another mistake we made at Disney early on was putting faith in our creative ideas for events, programs, and anything else we thought would attract people. It is a big waste of time. All we ended up with were Christian consumers. There isn’t room here to explain what we did at this point. But I can say, that we spent a couple of months “out-counseling” most of our consumers. If they couldn’t embrace our mission, we couldn’t invest in them.

We embraced prayer as if our entire church’s future depended upon it—because it did.

We embraced prayer as if our entire church’s future depended upon it—because it did.

We prayer walked the Disney Parks.

We asked God over and over to do what we couldn’t.

And He did. Only by making intercessory prayer our highest priority and committing to planting Jesus (Lesson One) did we see Jesus open the doors of opportunity to invest in the lives of Disney Cast Members.

For this reason, we will never stop interceding on behalf of our mission field.

Something to think about: If prayer is not your highest priority, you might put more faith in yourself than in God. When you shift from strategy to prayer, be prepared to see doors open that you never imagined.

The word “successful” never appears in Scripture. We often use that word as business terminology. And this term has found its way into our churches. That’s why we are obsessed with the Church metrics of buildings, budgets, and butts in seats.

Jesus used a different metric than we use today: He measured fruitfulness. The New Testament mentions fruit quite often. It’s an agricultural term that made sense during its time. But its significance remains the same today. Growing fruit requires getting our hands dirty, planting, watering, and nurturing. As every farmer will tell you, regardless of their efforts, their investment is at the mercy of the elements. They can do all they can, but they cannot predict the plenitude of the harvest. As the Apostle Paul said, “…it is God that gives the harvest.”

We have learned that fruitfulness can be measured. Listen to the stories in your congregation. Ask questions:

Are they planting Jesus?

Are they inviting people who don’t know Jesus to their dinner table?

Are they the Church beyond the walls of your building?

Are they using their gifts to serve others where they are?

Something to think about: You could have a big church, but not a fruitful one. I invite you to reconsider your metrics and what it would take to become fruitful.

We love to categorize things. We do the same with people. This way, we can determine whether others are with or against us. Politics, social agendas, and theological differences are often used to weed out those with whom we disagree. One scroll of our social media feed will reveal how rampant this attitude is…

…and it has to change.

Our church consists of young people (mostly in their twenties) from every walk of life. Every viewpoint you can think of is in the mix. However, we never let our politics, preferences, or social perspectives define who we are. Jesus is our focus; everything else flows from Him.

We have many in our church who are confused, conflicted, or curious about Jesus. Rather than labeling them, we invite them to be a part of our journey. First and foremost, we are all human beings made in the image of God. Second, we are all broken. Our church can’t save anyone. Only Jesus does that. So our privilege is to invite others to join our adventure and get to know Jesus.

We have many in our church who are confused, conflicted, or curious about Jesus. Rather than labeling them, we invite them to be a part of our journey.

Labels only divide us. But if we start with respecting others as human beings and understanding they are broken (as we all are), we can open the door for Jesus to do amazing things.

Lesson Five: Focus on the Mission and Stop Marketing

Years ago, I had to ask myself two questions: Who is God calling us to reach, and are we willing to do whatever it takes to reach them?

For Cast Member Church, it’s about reaching those who don’t know Jesus.

Do you know what I discovered?

When it comes to those who don’t know Jesus, they could care less about our branding and marketing. They don’t trust it. They equate church marketing with infomercials and political advertising.

The other thing I’ve learned is that all of our taglines, billboards, bumper stickers (and different marketing approaches) only appeal to Christians, who also happen to be consumers.

It is my humble (yet informed) opinion that marketing is often an attempt to shortcut the responsibility of every follower of Jesus to live out the Great Commission.

Cast Member Church resounds with those who believe their most crucial role in this life is to BE JESUS and REVEAL JESUS to others. Being Jesus earns them credibility; revealing Jesus opens the door to life transformation.

Cast Member Church resounds with those who believe their most crucial role in this life is to BE JESUS and REVEAL JESUS to others.

Fully embracing the mission is how the Church grows and multiplies; not slick marketing.

Something to think about: Who is Jesus calling you to reach, AND are you willing to do whatever it takes to reach them?

Some of these lessons may be difficult to consider or even accept. All I can say is this is OUR experience. If you want to have an active Kingdom Influence in the world, it will require placing your plans, preferences, and perspectives at the feet of Jesus.

If you want to see your church step into a new season of fruitful ministry, be willing to do what you haven’t done before. Get comfortable with being uncomfortable. Jesus offers a Kingdom adventure to anyone who will trust and obey, even if it doesn’t make sense at the time.

In time, it will make sense. And you’ll see the fruit that proves it. Steven and his wife, Lucia, have passionately led Cast Member Church from its inception. With 30 years of pastoral leadership in his rearview mirror, Steven is a recognized cultural futurist and creative communicator for churches and organizations worldwide. Steven is the author of such titles as KINGDOM INFLUENCE:  Three Proven Keys to Revealing Jesus in a Skeptical and Suspicious World and A GUIDE TO A LIFE BEYOND IMAGINATION. He is currently working on two follow-up titles, to be released later this year. Steven and Lucia have two adult children and split their time living in Orlando, Florida and Paris, France.