Before You Pioneer: Insights from Wesley’s Conversion and Spiritual Formation

Rekindling His Relationship with the Moravians

After struggling and failing as a missionary in the US, John Wesley returned to Britain, where he developed a reputation as a radical. It was also at this time that John was undergoing another theological development.

This shift had been initiated three years prior in a conversation with the German Moravian missionary August Spangenberg about the so-called new birth. Soon after arriving in Savannah, Spangenberg stopped John dead in his tracks one day with two deeply straightforward questions: “Have you the witness within yourself? Does the Spirit of God bear witness with your spirit that you are a child of God?”

John was self-admittedly dumbfounded. As he wrote in his journal, “I was surprised, and knew not what to answer.”

John chewed the cud of Spangenberg’s questions for the entire time he lived in Georgia, and after returning to England, John befriended another German Moravian missionary who picked up where Spangenberg left off. His name was Peter Böhler, and although they awkwardly corresponded in Latin (since neither John’s German nor Peter’s English was sufficient), Böhler’s influence on John’s life was immeasurable.

The Moravian Church, of which Böhler was a pastor, was a Protestant denomination headquartered in Germany but with roots in the medieval Czech Republic.  The Moravian Church was reorganized in the early 1700s under the leadership of the Lutheran Pietist Count Nicholas Ludwig von Zinzendorf, a nobleman who housed Moravian refugees on his property. Zinzendorf emphasized the work of the Holy Spirit in the life of all individual believers along with freedom from sin—a very radical idea at that time—and he launched the first large-scale missionary efforts among any Protestant denomination. Peter Böhler, a disciple of Zinzendorf’s, was then in England on his way to colonial America as a missionary when he befriended John Wesley.

Böhler, though almost a decade younger than the learned John, was what one biographer rightly called John’s “spiritual director.” He was the one who directly persuaded John that each believer could come to salvation in Christ by faith alone “in a moment,” rather than gradually over time, and that all true believers received an inner testimony of the Spirit’s presence following salvation, which could keep them from sinning.

This was ground-breaking to John—and also deeply depressing. Despite the amazing work he had performed for years—preaching, teaching, leading prayers, fasting, administering the sacraments, visiting prisoners, and striving for absolute moral perfection—he constantly doubted whether the Spirit was active in his life and whether he was justified in God’s eyes. In one moment of despair, John asked Peter if he should abandon ministry altogether since he couldn’t be sure if he had enough personal faith. Peter replied immediately that he should not.

John took this advice to heart, and the Protestant world has never been the same. Everywhere John went, he preached faith—a personal, living faith that flooded the Christian’s heart with both conviction and certainty. The first recipient of what John called a theology “of salvation by faith alone” was a prisoner on death row named Clifford. It was March of 1738. Ministering to prisoners was nothing new for John, but the spiritual certainty he shared with Clifford that day was a turning point in his life and ministry. As one biographer explained, “[John] would never have done such a thing beforehand, for he was skeptical about the possibility of eleventh-hour repentance….He had never before believed salvation was thus attainable.”

The Conversion Heard around the World

Back in London, Böhler had established a forum for people committed to a life of spiritual formation. It was an eighteenth-century preview of Renovaré. Named the Fetter Lane Society, it consisted of a group of like-minded believers who met weekly to push themselves spiritually and to remain accountable to one another.

It was just the sort of group that John Wesley loved. It was also similar to the societies that he had previously founded at Oxford and Savannah. Absolute openness was required for all participants in the Fetter Lane Society, and discipleship was the main topic of discussion. Participants, John recorded in his diary, were required to “speak as freely, plainly, and concisely as he [could], the real state of his heart, with his several temptations and deliverances, since the last time of the meeting.” Included in the society were regular times of prayer, intercession, fellowship, and feasting.

It was this Moravian society that paved the way for John’s well-known conversion experience, which, true to Peter Böhler’s words, only occurred after confidently, though still theoretically, preaching faith in the pulpit.

The date was May 24, 1738. In many ways, it was the birthday of evangelicalism, a movement that has traveled the world over with the Methodist-influenced mandate to save people from their sins. In this way, John’s “Aldersgate experience” was a conversion heard around the world. As John famously reported in his journal:

In the evening I went very unwillingly to a society in Aldersgate Street, where one was reading Luther’s Preface to the Romans. About a quarter before nine, while he was describing the change which God works in the heart through faith in Christ, I felt my heart strangely warmed. I felt I did trust in Christ, Christ alone for salvation, and an assurance was given me that he had taken away my sins, even mine, and saved me from the law of sin and death.

Although John would eventually break with the Fetter Lane Society over theological reasons, he interpreted this event as a watershed in his thinking. In fact, John’s experience on this day has since framed countless conversion experiences, giving people the vocabulary to express instantaneous faith. It began a new chapter not only in the story of John’s life, but also that of Protestant Christianity. 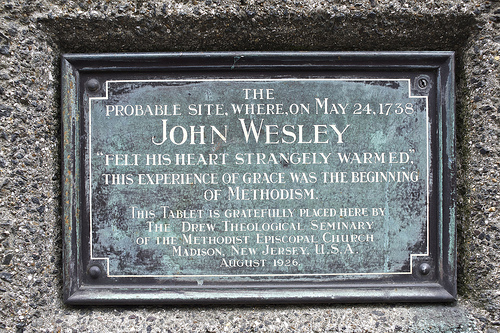 [Because the original Fetter Lane Society building along Aldersgate Street is no longer there, this plaque commemorates Wesley’s famous “Aldersgate Experience.”]

As we reflect on this phase of John Wesley’s life and ministry, here are some of the key characteristics, in my opinion, that enabled him to eventually experience success as a cultivator of a fresh expression:

Despite a full workload, Wesley always found time to take care of himself spiritually

Pictured above: Left, John Wesley, Right, Peter Böhler. Böhler (1712-1775), the German Moravian missionary who so profoundly influenced John Wesley’s understanding of salvation by faith alone and the presence of the Holy Spirit in a believer’s life.

Kenneth Collins, A Real Christian: The Life of John Wesley 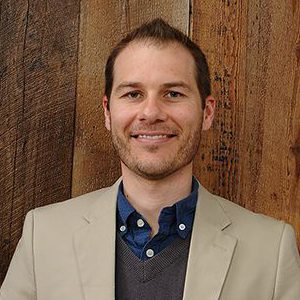